During the stakeholder focus group meeting “Encouraging and education opportunities for the children of Roma Community” in Shkodra, on October 14, 2014, with the interested stakeholders to encourage education, the Malteser staff presented the work it is doing in collaboration with the local and national stakeholders to extent the lessons derived from effective methods of integration. 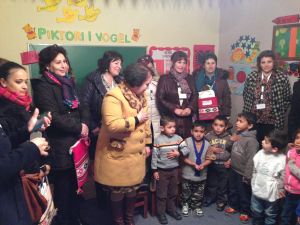 The recommendation at the conclusion of the meeting was the opportunity to closely observe the four successful educational practices in several districts of the country.
Thus, Malteser Albania in collaboration with the Ministry of Social Welfare, as the affiliate partner of the Project “Effective Programs for the Active Integration/Inclusion of the Roma in South-East Europe” (Pairs 18 partners from 8 SEE countries, including Albania), financed by the European Commission through the Transnational 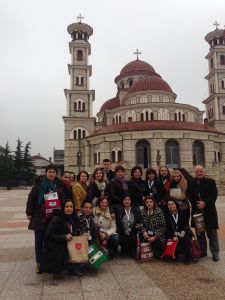 Europe, held on 25-26 November 2014, a study visit in the cities of Lezha, Tirana, Elbasan and Korça.
This study visit aimed the involvement and sensitization of the interested stakeholders to encourage preschool and school education of Roma and Egyptian communities in our country, as well as the presentation of successful initiatives in Lezha, Elbasan,Tirana, and Korça in the social inclusion of Roma and Egyptian children.
On November 25, the first stop was in Lezha, in the community center “Holy Mary”, where the presentation of the project was made by its representatives.
In Tirana, the representatives of the organization Mr. Zini Kore, presented the project applied by the ARSIS Center, “The House of colors”, in collaboration with the Municipality of Tirana.
The presentation of the following practice was in the center “Balashe” in Elbasan by its leader, Mrs. Blerina Kamani. This center operates in collaboration with the Municipality of Elbasan.
On November 26, the last stop was in Korça, where two good practices were presented and two centers were visited: the project “Help for Children” by CEFA, Korça branch, presented by the local leader Mr. Robert Stratobërdha, and the preschool project “Happy Children”, of the Amarodrom organization.