access_timeApril 30, 2016
The Extraordinary Jubilee of Mercy is a period of prayer for Catholics held from the Feast of the Immaculate Conception (December 8), 2015 to the Feast of Christ the King (November 20), 2016.
There will be almost 2,500 volunteers of the Sovereign Order of Malta active in Rome during the 12 months of this Extraordinary Jubilee.
The participants are from Europe and other countries, including Germany, Austria, Ireland, Switzerland, France, Malta, Albania, Belgium, Netherlands, United Kingdom, Cuba and America. They provide medical assistance to the thousands of pilgrims expected in Rome during the year. The teams of doctors, nurses and rescuers are placed in St Peter’s Square and in the other Roman basilicas: St John Lateran, St Paul outside the Walls and St Mary Major, as well as in Piazza di Spagna.
For each basilica, the Order of Malta’s volunteers cover three shifts a day – from 7 a.m. to 1 p.m. and from 1 p.m. to 7 p.m. There is a doctor, a nurse and two rescuers for each shift. The operational centre for the volunteers is the Order of Malta’s First-Aid Post located a few meters from the entrance to St. Peter’s Basilica, which for 35 years has been offering healthcare to pilgrims 365 days a year.
From 23 April 2016 to 30 April 2016, the Albanian Organization of the Order of Malta was present in this activity with two teams. Each team had 4 participants: a doctor, a nurse and two rescuers. They offered medical assistance in 4 points: at St Paul Outside the Walls, at St Peter’s Square, St John Lateran and St Mary Major. 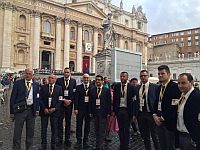 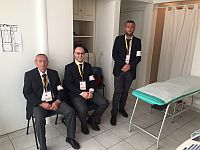 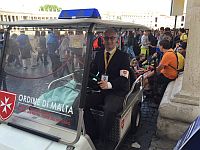