access_timeMay 9, 2016
Europe Day commemorates 9 May 1950, when the then French Foreign Minister Robert Schuman presented his proposal on the creation of an organised Europe, to help maintain peaceful relations between European countries. This proposal, known as the ‘Schuman declaration’, is considered to be the act that created what is now the European Union. 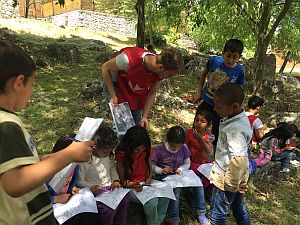 Even in Albania, this day is considered as special and festive. This year, the city to to celebrate it, was Shkodra.
The Albanian Organization of the Order of Malta had scheduled a social event to mark the day. The volunteers had prepared some informational and animated stories for children about Europe: countries, their population, seas and mountains that are part of Europe, etc.
The event was concretized with a short competition between children, completing the map with major European countries.
The Europe Day ended with a satisfactory performance and activities welcomed by the children.