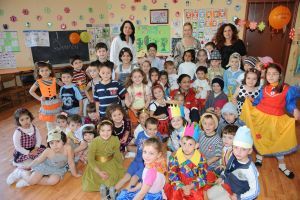 In January 2010 Malteser Albania started the realization of its project of a Kindergarten for children who are in need, who are not integrated in the society, and for those whose families can’t effort private kindergartens because they are expensive and state ones do not cover the needs.
This kindergarten is a project which is being realized thanks to the financial support of Malteser Hospitaldienst Austria, and the former Ambassador of the Order of Malta in Albania, Prof. Dr. Günther Granser, for a period of three years, and the offer of the rooms for free by the Municipality of Shkodra. The kindergarten which is found at the settings of the elementary school “Mati Logoreci”, welcomes about 60 children divided in two groups according to their age, from 7.30-14.00 from Monday to Friday and there are two teachers and the assistant (with the duty of helping the children when eating, during activities, helping the teacher, etc) who conduct it. During the scholastic year, the teachers follow a program and a plan which is compiled according to the year program approved by the Ministry of Education of Albania. The education program is intertwined with entertaining programs and various excursions.
For the families of these children, this kindergarten is a great chance, taking into consideration the difficulties they would have sending their children to private kindergartens, or leave them at home.